Redacción Médica & MYSPHERA Conference: “The ‘mismatch’ between processes and registration undermines the operability of hospitals” Last Tuesday we held, in collaboration with the specialized media Redacción Médica, the conference: “Lean Healthtech: the value of time in operating theatres”.

The conference was opened by José María Pino García; president-editor of Redacción Médica and our CEO, Salvador Vera.

An introduction focused on the importance of healthcare technology and its fundamental role in improving the National Health System. A role that cannot be played unless there is a good investment in innovation, as well as a change in hospital processes. As Salvador Vera explained in his speech, in order to achieve this situation, it is vital to implement a model in which time management in the operating theatre plays a leading role and has a direct impact on reducing waiting lists.

Following these words, in his speech, Salvador Vera also emphasised the importance of keeping the patient located during their stay in the hospital and knowing at all times where they are in the process, as one of the solutions to improve the surgical flow and, consequently, the waiting lists.

“We realised that there was a problem with the time it took from when patients changed their status to when it was recorded in their medical records. Specifically, there was a 30 percent deviation,” he explained. In response to this need to “automate processes and optimise information and communication between professionals”, the company’s solutions were born, he added.

Investing in innovation and changing processes

Along the same lines, the CEO of MYSPHERA highlighted the creation of a system for locating patients by means of a bracelet, thanks to which it is possible to control where they are in the process and improve surgical flows. As he indicated, this and similar resources are present in 47 Spanish hospitals and the company has begun to expand into France, the United Kingdom, Belgium and Latin America. In fact, Mysphera celebrates its tenth anniversary in 2022 and in this time the company has seen a change from “taking innovation from hospital to hospital to regional systems needing to invest and change processes”.

“In the case of operating theatres, these systems manage to reduce waiting lists because the number of daily interventions increases,” Vera said. 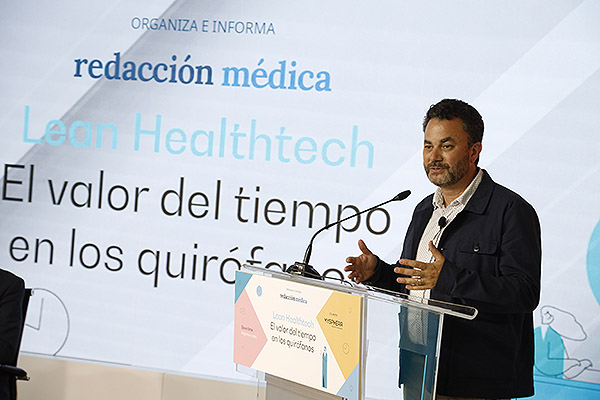 Salvador Vera, CEO of Mysphera, during the inauguration of the conference ‘Lean Healthtech: the value of time in operating theatres’. 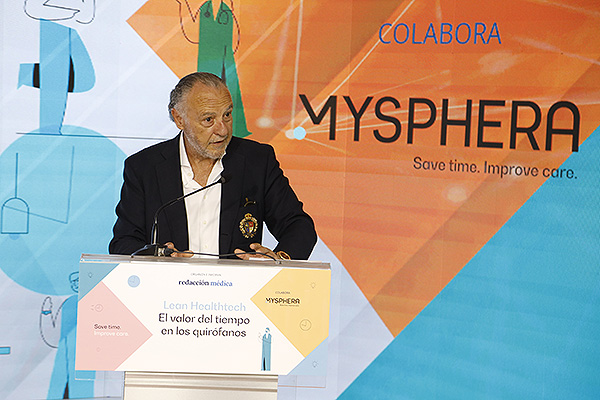 The technological factor in healthcare management

Also speaking at the inauguration of the event was José María Pino, president-editor of Redacción Médica, who pointed out that “the contribution of technology must reach the organisational processes of health systems, in other words, management itself”.

“The very organisation of medical consultations, diagnostic tests or surgical procedures generates a list of patients waiting their turn to be seen in the health system. This is a problem when the times are excessive”, explained Pino, adding that this has repercussions on the health of those affected and “we have seen this with the Covid-19 pandemic when patients with other pathologies were not attended to”.

For this reason, he is committed to recovering diagnostic agility and reducing waiting lists through innovation and technology. 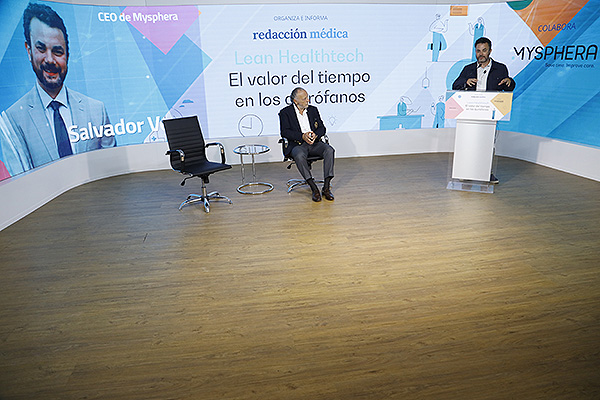 A moment during the opening ceremony of the ‘Lean Healthtech: the value of time in operating theatres’ conference.

The European Funds are “an opportunity for health”

Vera was also in charge of closing the conference after the two spaces for the exchange of ideas. In his closing speech, he mentioned the arrival of the European Funds and their management in health matters. In this regard, he called for more agility: “We cannot spend more than half the time on bureaucratic procedures and not on their execution. This is a problem that affects both the industry and the administration”.

He also advocated greater foresight with them in order to receive powerful investments, since, in his opinion, “they are a great opportunity” for healthcare companies.